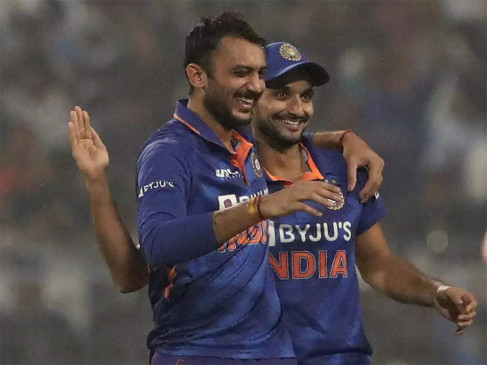 Digital Desk, Kolkata. Indian spinner Axar Patel jokingly said in a video chat with Harshal Patel that it looks like Patel is winning everything. This chat has come to the fore after a statement by Harshal, in which he said that the player of the match award was to be shared.

Harshal was adjudged the player of the match for figures of 2/25 in the second T20I in Ranchi. Axar was then awarded the Player of the Match award for his better spell of 3/9 in Kolkata, which India saw in a 3-0 clean sweep over New Zealand.

At the same time, Harshal received the Gamechanger Award for his spell of 2/26 and his knock of 18 runs in 11 balls at the Eden Gardens.

Harshal told Axar after the match, I don’t know if the man of the match award will be kept between us, to which Axar laughed and replied in the video chat, it looks like Patel is winning everything.

Commenting on his spell, Axar said, “It feels good to take wickets at the start of the over. It gives you confidence. At that time the ball was stopping and it was also spinning. So, I took three wickets in the power-play.

When asked about his debut series, Harshal said, “It’s an extraordinary feeling. I mean, I didn’t expect the debut match to be so good, I gave my 100 percent which we won the match.