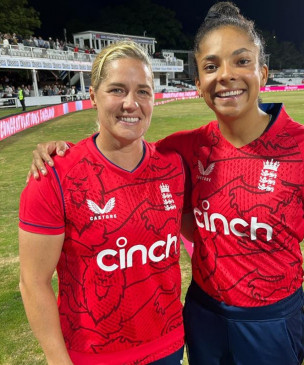 Digital Desk, Chelmsford (England). England women’s team registered a comfortable six-wicket win against South Africa in the opening T20 International here, with Katherine Brunt taking four wickets. England won the toss and decided to bowl. Brunt walks on the sun to Lara Goodwall and Captain Luce. Brunt then got Walvaardt caught by Sciver. However, the batsman batted at his best being the only player in the team. He scored 55 runs in 49 balls with 7 fours. At the same time, Brunt took the wicket of batsman Delmi Taktor.

South Africa scored 111 runs for the loss of nine wickets. Chasing the target, the women’s team batted brilliantly and achieved the target in just 15th over. Team opener Sophia Dunkley scored 59 runs in 39 balls with the help of 3 sixes and 5 fours and completed her half-century. At the same time, Heather Knight and Amy Jones scored 24 and 11 runs respectively and led the team to victory.

Katherine Brunt said after the end of the game, I bowled according to my plan to put pressure on the batsmen. I just wanted to bowl well for the team so that the team could win.