Digital Desk, New Delhi. Former Pakistani cricketer Shoaib Akhtar, who is known for his fast bowling, has given rise to a new controversy with his latest statement. Shoaib revealed in an interview to a sports website Sports Keeda that he was trying to kill India’s most successful and popular cricketer Sachin Tendulkar during the Karachi Test match between India and Pakistan in 2006. People have given different reactions on social media on Shoaib Akhtar’s statement. Let us tell you that Shoaib has been in discussion for more controversies than his game during his cricket career.

Shoaib Akhtar in an interview to Sports Keeda mentioned the Karachi Test match in 2006 that, I am telling this for the first time. I really wanted to kill Sachin at that time. I thought I had to injure Sachin at any cost. I also hit the ball on his helmet. I thought he was gone, he would die. But when I watched the video, I found that he had saved the ball from hitting the head. After that I tried to hurt him again.

Controversial statement given before about Sachin

Shoaib has given controversial statements about Sachin even before this. He has written in his autobiography Controversial Yours that Sachin was afraid to face his fast balls on the Faisalabad pitch.
At the same time, he also wrote that Sachin and Rahul Dravid are not match winners, they do not have the ability to win the match.

There were different reactions to Shoaib’s statement. Some users have not given much attention to this disclosure of Shoaib Akhtar. However, some users are also giving a befitting reply for criticizing Shoaib Akhtar and targeting the God of Cricket. One user said that people should not feel bad about Shoaib’s words, he was not insulting anyone but was talking about the bouncer ball.
At the same time, another user wrote in his tweet, Shoaib must have played 200 matches but, his stories are 30 thousand.

Shoaib Akhtar “I wanted to intentionally hit and get Sachin Tendulkar injured in Karachi Test 2006. I told my captain Inzamam that I want to hit on the helmet of Sachin. When I had hit on the helmet it looked as if Sachin is down but he was saved. I tried twice to injure Sachin.” 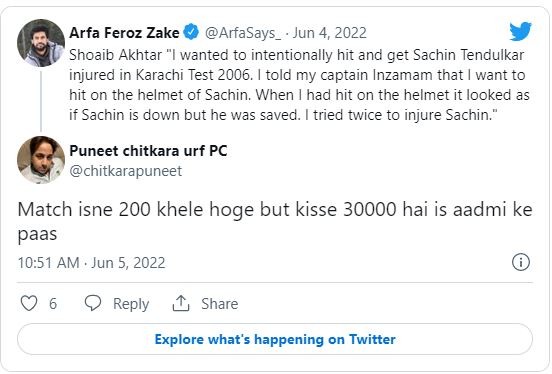 In the interview, Shoaib praised such a Pakistani fast bowler who was caught in match-fixing, which was suspended by the ICC as a punishment. Actually, Shoaib was talking about former Pakistan fast bowler Mohammad Asif. Shoaib said, the kind of bowling Asif did in the Karachi Test match, he is rarely seen.

Let us tell you that India lost this match by 341 runs. After winning this match, Pakistan won the Test series 2-1. This match will always be remembered for another reason, that is the hat-trick taken by former Indian fast bowler Irfan Pathan in the very first over of the match. He had dismissed Salman Butt, Younis Khan and Mohammad Yusuf on consecutive balls.