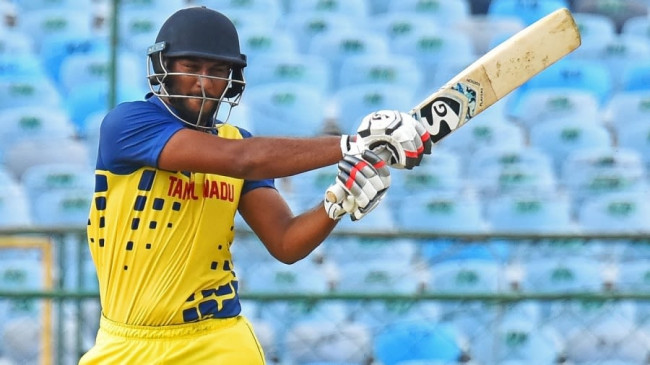 digital desk, New Delhi. M Shah Rukh Khan’s scintillating knock (33 not out from 15 balls) helped Tamil Nadu beat Karnataka by four wickets in the final played at the Arun Jaitley Stadium here on Monday. With this the team was able to win the Syed Mushtaq Ali Trophy twice in a row.

In the final match of the white ball, an exciting final match was seen between Karnataka and Tamil Nadu.

However, Karnataka bowler KC Cariappa dismissed both Shankar and Jagadeesan in the 16th over, making the run chase difficult for Tamil Nadu.

Shahrukh Khan came after this, at that time 55 runs were needed in 24 balls. After this, he along with Yadav carried the innings forward, but Yadav too was soon dismissed by Pratik Zain. Now 30 runs were to be scored in the last two overs.

Khan got Tamil Nadu back in the match with a six off the last ball of the 19th over, which now needed 16 runs in the last over.

In the final over, Khan hit a six off deep square leg off Jain’s last ball to register a thrilling win for Tamil Nadu.

Earlier, scintillating bowling from Kishor (3/12) and Yadav (1/32) prevented Karnataka from progressing to big scores. In the powerplay, Nair, Rohan Kadam, Manish Pandey put together just 32 runs on the board.

But, thanks to the innings of Abhinav Manohar (46 off 37 balls) and Praveen Dubey (33 in 25 balls), Karnataka managed to reach a respectable score.